Heroin vs. Oxycodone – What’s The Difference Between The Two Opioids? 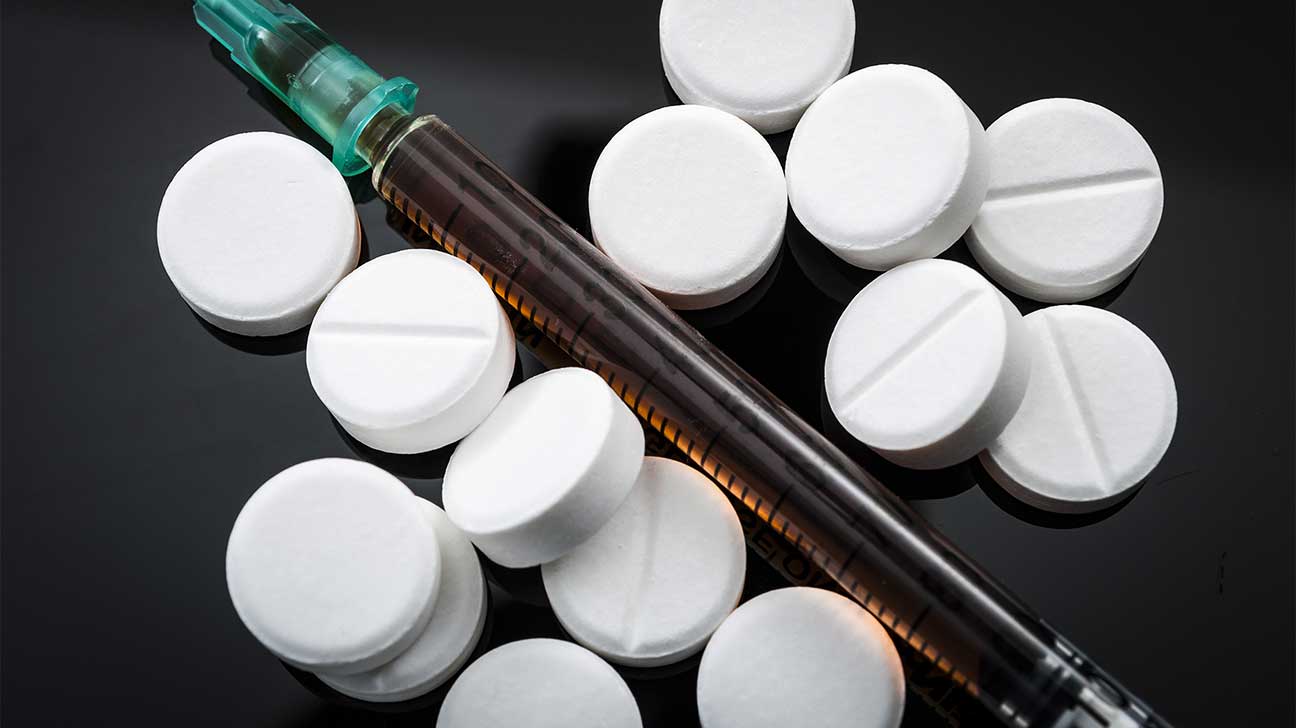 Heroin and oxycodone are both classified as opioids, and their molecular structure is nearly an exact match. But oxycodone is considered a legal painkiller, and heroin serves no legitimate medical purpose whatsoever. Nonetheless, both of these opioids have potential to be habit forming, and can result in addiction.

What Are The Differences Between Heroin and Oxycodone?

Heroin is illegal. In fact, The Drug Enforcement Administration labeled heroin a Schedule I drug, because it currently has no accepted medical use. The exact potency of heroin isn’t always clear either; there’s potential for it to be cut with any amount of starch, flour, powdered milk, or quinine. Heroin has also been laced with other potent drugs like fentanyl, pink, or carfentanil—a combination that earned the name Gray Death.

Unlike heroin, the ingredients of oxycodone are regulated by the Food and Drug Administration, so users aren’t getting a mystery substance. Oxycodone is labeled as a Schedule II controlled substance, because even though it can be prescribed treat severe pain, there is still potential for abuse. Whether it’s regulated or not, oxycodone can be seriously addictive as well, especially when it’s abused.

No matter the differences heroin and oxycodone have, they’re chemically similar and both part of a much bigger picture with the growing opioid crisis in the United States.

The number of prescription opioids:

have escalated from around 76 million in 1991 to nearly 207 million in 2013, with the United States their biggest consumer globally, accounting for almost 100 percent of the world total for hydrocodone and 81 percent for oxycodone (National Institute on Drug Abuse NIDA).

Heroin commonly appears as a white or brown powder that people inject into their blood stream or snort it into their nasal passage. It also comes in the form of a black, tar-like rock that can be smoked, or still injected.

No matter how the drug is used, onces it’s in the system, the euphoria that heroin elicits comes on relatively fast, and has been described as a rush of well-being, warmth, calmness, and even drowsiness. When someone uses heroin, they may experience heavy arms and legs, dry mouth, and a sudden relief of pain.

That feeling that heroin produces usually happens fast, but then it’s over just as rapidly as it came on. When a person has injected heroin, it kicks in after about 20 seconds, peaks around 2 hours, and will last up to 4 hours after administration. After the drug wears off, the user may feel a strong urge to use more of the drug.

There’s a possibility for the first dose of heroin to be fatal. And rarely do people “casually” use heroin, rather it’s just not as likely. This is partly because once a person becomes dependent upon heroin to feel good; they often find it’s hard to stop using the drug by themself.

There are a lot of different ways to treat an addiction to heroin. But because of the physical and mental components of an opioid addiction, an inpatient detoxification and behavioral therapy is often the safest way to get a grip on both types of addiction.

Oxycodone is the generic version of medicines such as OxyContin, Oxecta, Perloxx, Percolone, Percocet, and Percodan which are used to treat severe pain. It comes as a liquid solution, concentrate, tablet, or extended release tablet. Oxycodone is a controlled substance like heroin, and it can be habit forming. It also has a lot of potential for abuse.

One reason that people abuse oxycodone is that the euphoria it elicits is similar to that of heroin. So it makes them feel good. A person starts abusing oxycodone once they start using more pills than they’ve been prescribed, using someone else’s prescription, or even crushing up the pills then swallowing, snorting, or injecting it.

The question is, if prescription opioids like oxycodone serve a legitimate medical purpose, then why are they so dangerous? Well when someone uses oxycodone, the drug acts upon the opioid receptors and reward circuits of their brain (which is also true of heroin). So they may begin to enjoy the feeling, and then their brain naturally wants more.

Generally though, when a person safely uses oxycodone for pain, the effects wear off in 4 to 6 hours—but this is only when they’ve followed the doctor’s instructions. It’s usually when a patient veres away from those orders that they become more likely to get “hooked.” However, in an effort to avoid an addiction to oxycodone, patients are advised:

“Oxycodone may be habit-forming. Do not take more of it, take it more often, or take it in a different way than directed by a doctor. Tell your doctor if you or anyone in your family drinks or has ever drunk large amounts of alcohol, uses or has ever used street drugs, or has overused prescription medications, or if you have or have ever had depression or another mental illness. There is a greater risk that you will overuse oxycodone if you have or have ever had any of these conditions.”

What Are The Similarities Between Heroin And Oxycodone?

Heroin and oxycodone are both synthetic-opioids. Heroin is derived from morphine, and oxycodone comes from thebaine. Morphine and thebaine are both naturally occurring opiates that come from the poppy plant.

Both heroin and oxycodone go to work on the respiratory system and opiate receptors in the brain. By doing so, they slow down breathing and other motor functions, in the process making a person feel elated. It is this feeling of elation, and well-being that can make a person want to keep using the drug—thus addiction.

It is estimated that between 26.4 million and 36 million people abuse opioids worldwide, with an estimated 2.1 million people in the United States suffering from substance use disorders related to prescription opioid pain relievers in 2012 and an estimated 467,000 addicted to heroin (NIDA).

When someone becomes physically addicted, or dependent upon heroin or oxycodone, they may experience withdrawal symptoms when they stop using the drug. Opioid withdrawal is often described by intense cravings, insomnia, anxiety, depression, nausea, diarrhea, vomiting, hallucinations, and sweating.

Withdrawal isn’t the only problem with opioids, they can also result in overdose. An overdose means that a person has used too much of a drug, to the point that their body can’t metabolize the chemicals fast enough to get it out of their system. Almost nobody intends to take a fatal amount of opioids, but it still happens.

The number of unintentional opioid overdose deaths has nearly quadrupled since 1999. Opioids claimed more than 33,000 lives in 2015; which is more people than guns killed that same year.

An opioid overdose can be direct result of drug tolerance. It’s also more likely to occur when the drug is mixed with other substances like benzodiazepines.

In any case, some of the most common signs of an opioid overdose are:

An opioid overdose is a medical emergency. Call 911, if you believe someone is experiencing any kind of drug overdose.

Is Oxycodone A Gateway Drug To Heroin?

There are certain drugs or medicines that have been referred to as the “gateway” to heavier drugs. “There is a dangerous trend where people that have become addicted to prescription opioids begin using heroin because it’s cheaper to get,” (NIDA).

While there’s major risk of developing a substance use disorder for most people who abuse opioids, not everyone will experience the same urge to turn to heroin. It often depends on individual environments, genetics, physiology, psychology, and social surroundings. Whether or not someone switches to heroin also depends on the amount of oxycodone they’ve been using.

Nonetheless, “prescription opioid pain medicines such as OxyContin and Vicodin have effects similar to heroin. Research suggests that misuse of these drugs may open the door to heroin use. Nearly 80 percent of Americans using heroin (including those in treatment) reported misusing prescription opioids first,” (NIDA).

What Are The Different Side-Effects Of Heroin And Oxycodone?

Is There A Safe Way To Stop Using Opioids?

Yes, but it isn’t always easy, it takes work, honesty, and there may be times you want to give up. Inpatient rehab centers have helped people overcome the physical addiction of opioids by monitoring their withdrawal symptoms, implementing a medical detoxification, and using a medication-assisted treatment when necessary.

Addiction is a chronic relapse disease, and though there isn’t necessarily a cure, it’s still treatable. The mental addiction of opioids has been treated with evidence-based treatment at an inpatient or outpatient rehab center. But an inpatient rehab treatment may prove to be more effective, because it offers the safe living environment sometimes required to overcome addiction.

How To Find Freedom From Opioid Addiction

Contact OpioidTreatment.net today to speak to someone who understands opioid addiction. There are thousands of addiction treatment centers in the United States, and with our help, the best rehab for you will be within reach.

National Institute on Drug Abuse - What Are The Different Types of Opioids?