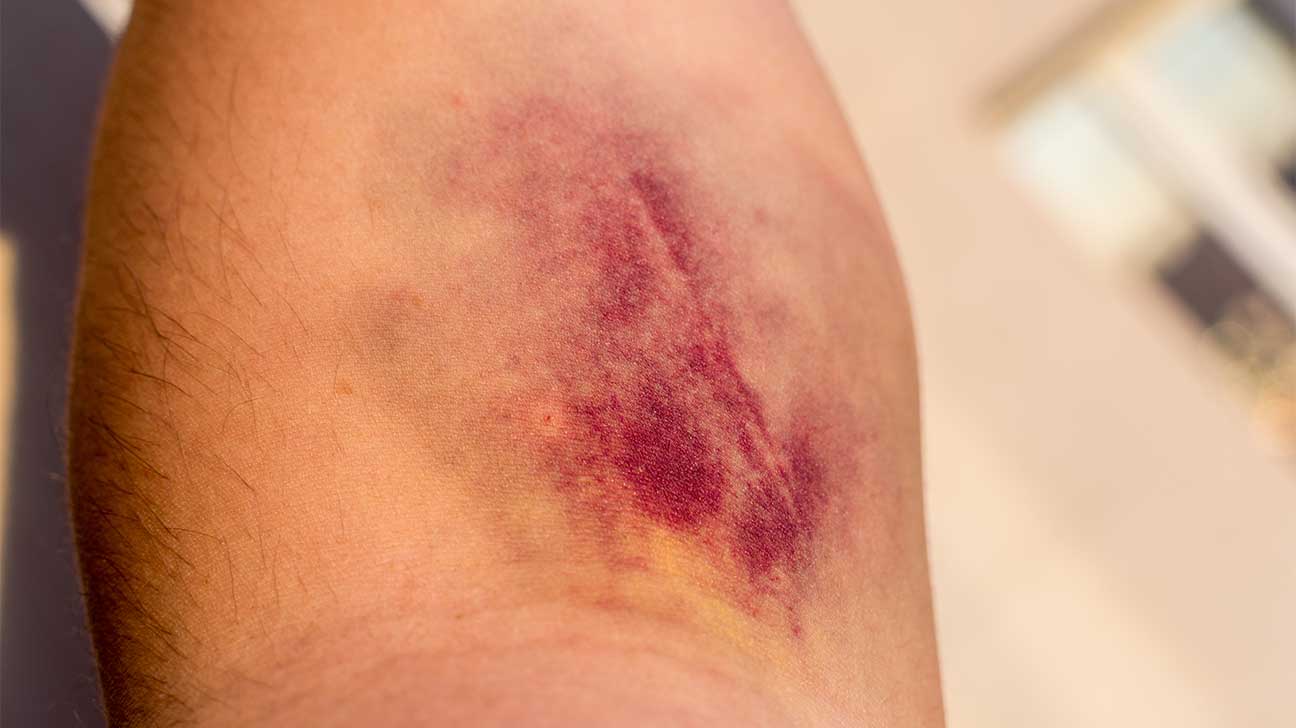 What Are Track Marks?

Track marks are the tell-tale sign of chronic, intravenous drug use. Certain drugs can be injected directly in the vein, and the effects from this type of abuse occur quickly and intensely. Fresh track marks often appear as non-healed puncture wounds.

Because of the risks that come with IV drug use, it’s important that anyone who struggles with this form of drug abuse gets proper treatment to avoid potential dangers, like addiction and overdose.

What Is Intravenous (IV) Drug Use?

Intravenous (IV) drug use is when an individual injects a drug into their body with a syringe (needle). Typically, when a drug is injected, it is in powder form and mixed with water, and the solution is then injected. The most common site used for IV drug use is in the forearm of the non-dominant arm, near the crease of the elbow. However, after long-term use, that site will likely become too scarred or inflamed to continue injecting.

Other places that might be used to inject drugs are the hand, foot, groin, or leg. Some people have even used their neck as an injection site, or their dominant arm, if the person is injecting drugs with others. While track marks point to current and ongoing drug abuse, long-term IV drug abuse becomes more noticeable as discolorations and scar tissue appear around the area injected most.

Which Drugs Are Abused By Injection?

People who struggle with addiction may abuse any drug which is water-soluble (dissolves in water) by injection.

Drugs that may be injected intravenously include:

The substance most commonly associated with IV drug use is heroin. Approximately 86 percent of people who abuse drugs by injection recreationally used prescription opioids before moving on to heroin.

Dangers Of IV Drug Use And Sharing Needles

Over time, continuous injection in the same area can result in scarring, dark pigmentation at the site of injection, bruising, damage to veins, and lesioning.

In addition to track marks, another common effect of intravenous drug use is collapsed veins. Blood clots form within veins near the injection site after the lining of the vein has been damaged. Many factors contribute to this problem, including continued use of the same site, blunt needles, and improper technique.

Another significant issue with IV drug use is the use of unsanitary needles and the sharing of needles. Unsanitary needles can lead to skin infections, including cysts, ulcers, and abscesses. Sharing needles can transmit serious blood-borne viruses, such as hepatitis C and HIV. More than 67 percent of individuals who use IV drugs test positive for Hepatitis C.

There are many other diseases a person abusing drugs by injection could contract, including:

Injecting drugs can result in a number of other conditions in addition to track marks, as IV drug use increases the risk of multiple adverse health effects.

Long-term health risks of IV drug use include:

Does IV Drug Use Lead To Addiction?

Intravenous drug use results in an intense, short-lived quick “high”. This form of drug use usually indicates significant substance abuse. People who abuse drugs by injection are at increased risk of quickly developing an addiction, or a mental reliance on the drug.

Certain drugs also cause physical dependence, meaning a person’s body relies on the drug to function. This causes the person to experience uncomfortable or even painful withdrawal symptoms when not abusing the drug.

People who use drugs intravenously are also at high risk of overdose and death, as the drug is injected directly into the bloodstream. This means the drug bypasses the digestive system, producing instant effects. With time, the person may develop a tolerance to the effects and use more and more of the drug to get the same effects, leading to a higher risk of overdose.

Drugs that are injected, especially heroin, may also be cut with other agents or ingredients that could cause an interaction inside the body once injected.

People who are hiding IV drug use in the early stages may do so by wearing clothing that covers injection sites and track marks. They may also find areas to inject that are more discreet so they can cover the track marks with clothing or makeup.

Hiding track marks or drug use is one of the beginning signs of addiction. People with addictions have formed a reliance on the drug, and may be experiencing strong cravings for it and find it difficult to stop use, even if they want to.

Detoxification, which usually occurs in an inpatient setting prior to a formal treatment program, can help individuals wean off their physical dependence on the drug so their bodies and minds will be receptive to treatment. Medications used during withdrawal can ease the more painful symptoms.

Recovering from drug addiction is a long-term process, and an aftercare plan can help individuals stay on track with the use of 12-step programs or other support groups. With time, aftercare becomes less intense, but ongoing support is usually needed to ensure a drug-free life. To find out more about intravenous drug abuse, addiction, and treatment, contact us today.